Our previous story regarding WildPressure was dedicated to their campaign against industrial-related targets in the Middle East. By keeping track of their malware in spring 2021, we were able to find a newer version. It contains the C++ Milum Trojan, a corresponding VBScript variant with the same version (1.6.1) and a set of modules that include an orchestrator and three plugins. This confirms our previous assumption that there are more last-stagers besides the C++ ones, based a field in the C2 communication protocol that contains the “client” programming language.

Another language used by WildPressure is Python. The PyInstaller module for Windows contains a script named “Guard”. Perhaps the most interesting finding here is that this malware was developed for both Windows and macOS operating systems. The coding style, overall design and C2 communication protocol is quite recognizable across all three programming languages used by the authors.

The versioning system shows that the malware used by WildPressure is still under active development. Besides commercial VPS, this time the operators used compromised legitimate WordPress websites. With low confidence this time, we believe their targets to be in the oil and gas industry. If previously the operators used readable “clientids” like “HatLandid3”, the new ones we observed in the Milum samples appear to be randomized like “5CU5EQLOSI” and “C29QoCli33jjxtb”.

Although we couldn’t associate WildPressure’s activity with other threat actors, we did find minor similarities in the TTPs used by BlackShadow, which is also active in the same region. However, we consider that these similarities serve as minor ties and are not enough to make any attribution.

This PyInstaller Windows executable was detected in our telemetry on September 1, 2020, showing version 2.2.1. It contains an archive with all the necessary libraries and a Python Trojan that works both on Windows and macOS. The original name of the script inside this PyInstaller bundle is “Guard”. The malware authors extensively relied on publicly available third-party code[1] to create it. Near the entry point one can find the first operating system-dependent code, which checks on macOS if another instance of the Trojan is running. 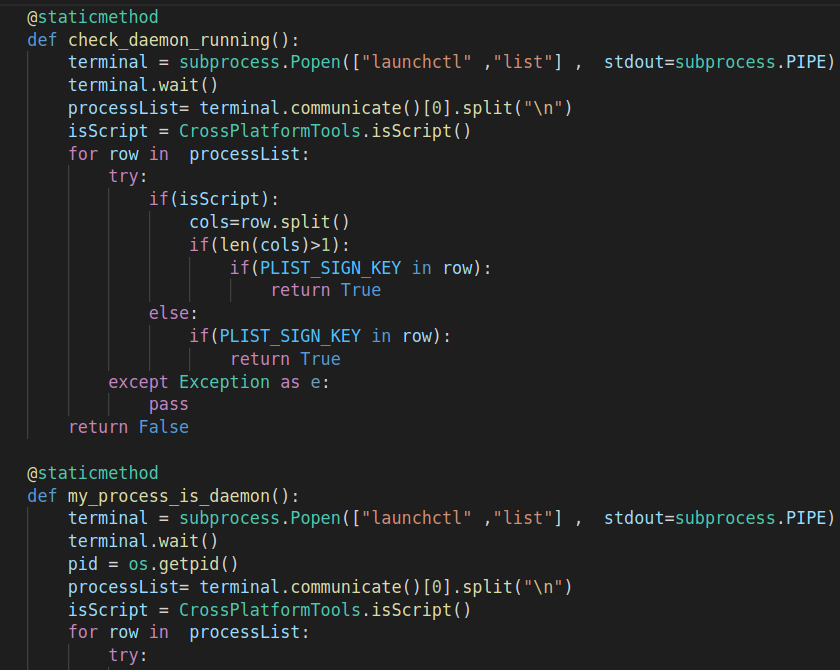 The Guard class constructor contains initial values, such as an XOR key (enc_key field) to decrypt the configuration. In this sample, it is set to decimal 110 and the C2 message type (answer_type_value field) to “Check”. The code that initializes class members for encryption and network communications is OS independent, but persistence methods aren’t.

For macOS, Guard decodes an XML document and creates a plist file using its contents at $HOME/Library/LaunchAgents/com.apple.pyapple.plist to autorun itself; while for Windows, the script creates a RunOnce registry key SoftwareMicrosoftWindowsCurrentVersionRunOncegd_system. We provide the full list of persistence IoCs at the end of this article.

Malware decodes the XML, fills [pyscript] placeholder with its path and drops .plist file for persistence

Guard’s configuration data has to start with the string “*grds*”. Below is a comparison between different WildPressure sample parameters, including magic values used to pre- and post-fix the configuration data.

These prefix and suffix values allowed us to decode Mulim and Guard configuration data as well as the self-decrypted Tandis with Bash and Python scripts. Following configuration parsing, the Trojan is ready for its main working cycle. It awaits commands from its C2 that are XML-based and XOR-encrypted with the aforementioned decimal value 110. Among them are typical Trojan functions: downloading files, uploading files, executing commands with the OS command interpreter, updating the Trojan and cleaning up the target.

We named the Tandis Trojan after its “serial” configuration parameter. This VBScript Trojan version is Windows-only and relies much more on WQL queries than Guard. It was first detected in our telemetry on September 1, 2020, showing version 1.6.1. The abilities, parameters and working cycle are quite similar to Guard and other WildPressure malware.

The persistence is again system registry-based (please check the IoCs at the end). The function HexToBin() is in charge of the additional encryption used inside the script for some strings and C2 communication. The basic unhexlify-XOR algorithm is the same as in the initial self-decryption; and to read plain text we used the same aforementioned script with corresponding key (again 110 decimal, stored in a class data member). The C2 communication protocol is “encrypted XML over HTTP” (using Msxml2.XMLHTTP and Msxml2.DOMDocument objects).

Below are the commands that Tandis supports:

In addition to the already enumerated scripting implants that WildPressure uses, some findings are related to C++ developments. We discovered several, previously unknown, interconnected modules used to gather data on target hosts in our telemetry. The compilation times seen in this malware precedes our detection date by a large margin, and we therefore consider them to be tampered with.

The plugins we found are rather simplistic. We will therefore focus on the implemented interface between the orchestrator and its plugins.

The orchestrator uses a timer function that runs every two minutes and parses the configuration file for the plugin file path, function name, etc., and attempts to execute the corresponding plugin.

The overall communication workflow between orchestrator and the plugins

Plugins come in the form of a DLL that exports a function named accessPluginInterface(), which returns a pointer to a class object to the orchestrator. This main module then runs the second function from the virtual functions table, passing it the pointer to instantiated class objects. The plugins we’ve seen so far contained RTTI information.

This plugin gathers really detailed data about the host with WQL queries and creates a JSON with a publicly available library. The data includes OS version and the set of installed hotfixes, BIOS and HDD manufacturers, installed and running software and security products separately, user accounts and network adapters settings, etc. The corresponding executed WQL queries look like this:

These plugins are quite straightforward. The keylogger sets a WH_KEYBOARD_LL hook to gather the keystrokes and gets clipboard content and Windows titles. The second takes screenshots by timer and by mouse events, setting a WH_MOUSE_LL hook.

The actor used both VPS and compromised servers in their infrastructure, most of which were WordPress websites. The legitimate, compromised websites served as Guard relay servers. In our previous 2019 investigation, we were able to sinkhole the Milum C2, upiserversys1212[.]com. During our current investigation we managed to sinkhole another Milum C2, mwieurgbd114kjuvtg[.]com. However, we haven’t registered any recent Milum requests sent to these domains with the corresponding main.php or url.php URI.

Who was hit and by whom

We have very limited visibility for the samples described in this report. Based on our telemetry, we suspect that the targets in the same Middle East region were related to the oil and gas industry.

We consider with high confidence that the aforementioned Tandis VBScript, PyInstaller and C++ samples belong to the same authors that we dubbed WildPressure due to the very similar coding style and victim profile. However, another question remains: is WildPressure connected to other threat actors operating in the same region?

Both tactics aren’t unique enough to come to any attribution conclusion – it’s possible both groups are simply using the same generic techniques and programming approaches.

Learn threat hunting and malware analysis with Denis Legezo and other GReAT experts.

Online health security – when ‘opt out’ isn’t an option

773 million email IDs, 21 million passwords for anyone to see in massive data dump

Are you doing enough to secure your...

Be Wary Of Fake Windows 11 Installers...

July 29, 2021
We use cookies on our website to give you the most relevant experience by remembering your preferences and repeat visits. By clicking “Accept”, you consent to the use of ALL the cookies.
Do not sell my personal information.
Cookie SettingsAccept
Manage consent