Exploitation of the CVE-2021-40444 vulnerability in MSHTML

Last week, Microsoft reported the remote code execution vulnerability CVE-2021-40444 in the MSHTML browser engine. According to the company, this vulnerability has already been used in targeted attacks against Microsoft Office users. In attempt to exploit this vulnerability, attackers create a document with a specially-crafted object. If a user opens the document, MS Office will download and execute a malicious script.
According to our data, the same attacks are still happening all over the world. We are currently seeing attempts to exploit the CVE-2021-40444 vulnerability targeting companies in the research and development sector, the energy sector and large industrial sectors, banking and medical technology development sectors, as well as telecommunications and the IT sector. Due to its ease of exploitation and the few published Proof-of-Concept (PoC), we expect to see an increase in attacks using this vulnerability.

Kaspersky is aware of targeted attacks using CVE-2021-40444, and our products protect against attacks leveraging the vulnerability. Possible detection names are: 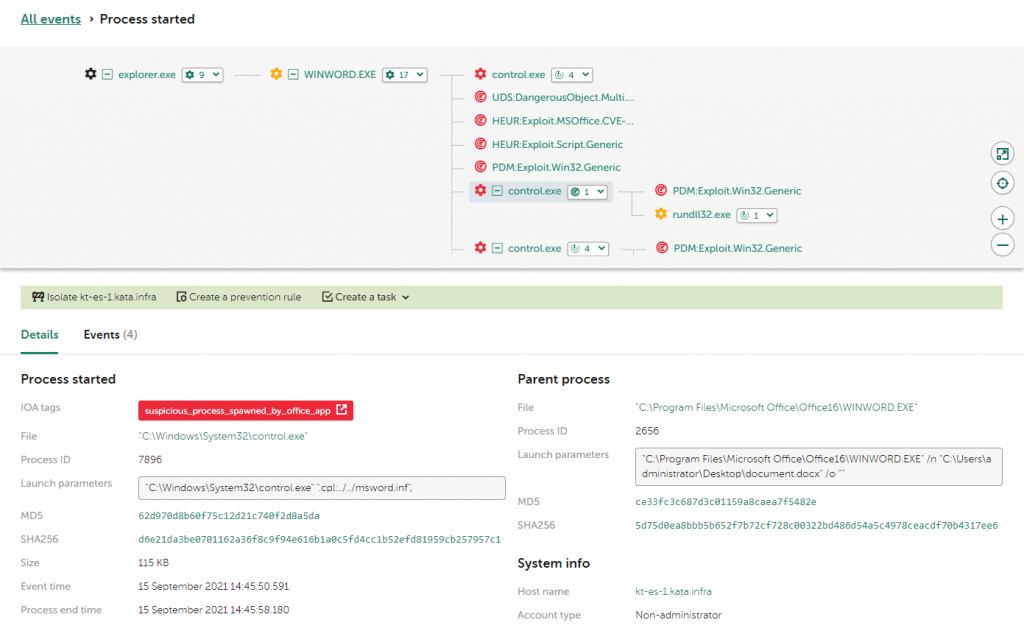 The remote code execution vulnerability CVE-2021-40444 was found in MSHTML, the Internet Explorer browser engine which is a component of modern Windows systems, both user and server. Moreover, the engine is often used by other programs to work with web content (e.g. MS Word or MS PowerPoint).
In order to exploit the vulnerability, attackers embed a special object in a Microsoft Office document containing an URL for a malicious script. If a victim opens the document, Microsoft Office will download the malicious script from the URL and run it using the MSHTML engine. Then the script can use ActiveX controls to perform malicious actions on the victim’s computer. For example, the original zero-day exploit which was used in targeted attacks at the time of detection used ActiveX controls to download and execute a Cobalt Strike payload. We are currently seeing various types of malware, mostly backdoors, which are delivered by exploiting the CVE-2021-40444 vulnerability.

Researcher Hacked Space-X Starlink Via A $25...

September 26, 2022
We use cookies on our website to give you the most relevant experience by remembering your preferences and repeat visits. By clicking “Accept”, you consent to the use of ALL the cookies.
Do not sell my personal information.
Cookie SettingsAccept
Manage consent