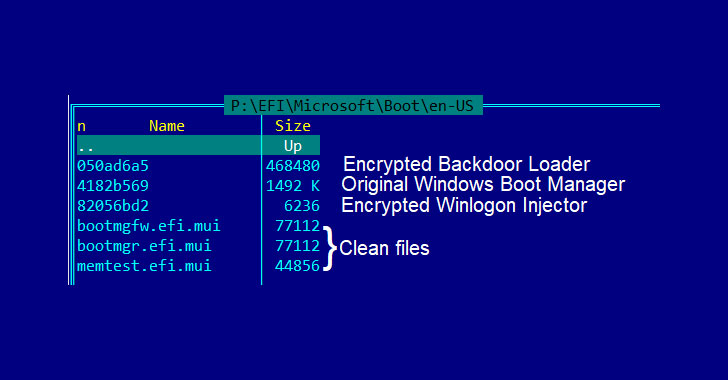 Detected in the wild since 2011, FinFisher (aka FinSpy or Wingbird) is a spyware toolset for Windows, macOS, and Linux developed by Anglo-German firm Gamma International and supplied exclusively to law enforcement and intelligence agencies. But like with NSO Group’s Pegasus, the software has also been used to spy on Bahraini activists in the past allegedly and delivered as part of spear-phishing campaigns in September 2017.

While the tool was previously deployed through tampered installers of legitimate applications such as TeamViewer, VLC, and WinRAR that were backdoored with an obfuscated downloader, subsequent updates in 2014 enabled infections via Master Boot Record (MBR) bootkits with the goal of injecting a malicious loader in a manner that’s engineered to slip past security tools.

The latest feature to be added is the ability to deploy a UEFI bootkit to load FinSpy, with new samples exhibiting properties that replaced the Windows UEFI boot loader with a malicious variant as well as boasting of four layers of obfuscation and other detection-evasion methods to slow down reverse engineering and analysis.

“This way of infection allowed the attackers to install a bootkit without the need to bypass firmware security checks,” Kaspersky’s Global Research and Analysis Team (GReAT) said in a technical deep dive following an eight-month-long investigation. “UEFI infections are very rare and generally hard to execute, they stand out due to their evasiveness and persistence.”

UEFI is a firmware interface and an improvement over basic input/output system (BIOS) with support for Secure Boot, which ensures the integrity of the operating system to ensure no malware has interfered with the boot process. But because UEFI facilitates the loading of the operating system itself, bootkit infections are not only resistant to OS reinstallation or replacement of the hard drive but are also inconspicuous to security solutions running within the operating system.

This enables threat actors to have control over the boot process, achieve persistence, and bypass all security defences. “While in this case the attackers did not infect the UEFI firmware itself, but its next boot stage, the attack was particularly stealthy, as the malicious module was installed on a separate partition and could control the boot process of the infected machine,” the researchers added.

HTTPS Everywhere Browser Extension Will Be No More – Announces EFF

January 6, 2022
We use cookies on our website to give you the most relevant experience by remembering your preferences and repeat visits. By clicking “Accept”, you consent to the use of ALL the cookies.
Do not sell my personal information.
Cookie SettingsAccept
Manage consent