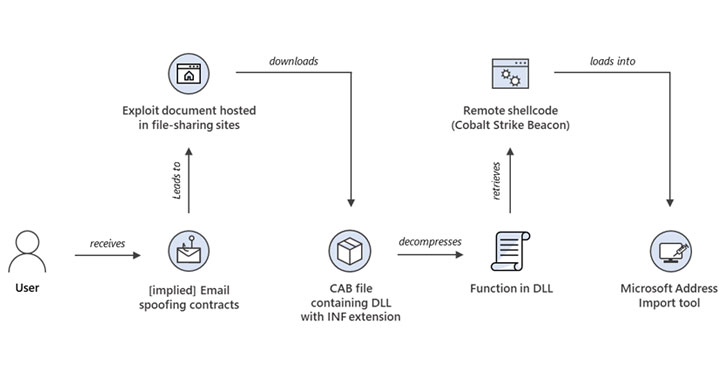 “These attacks used the vulnerability, tracked as CVE-2021-40444, as part of an initial access campaign that distributed custom Cobalt Strike Beacon loaders,” Microsoft Threat Intelligence Center said in a technical write-up. “These loaders communicated with an infrastructure that Microsoft associates with multiple cybercriminal campaigns, including human-operated ransomware.”

Details about CVE-2021-40444 (CVSS score: 8.8) first emerged on September 7 after researchers from EXPMON alerted the Windows maker about a “highly sophisticated zero-day attack” aimed at Microsoft Office users by taking advantage of a remote code execution vulnerability in MSHTML (aka Trident), a proprietary browser engine for the now-discontinued Internet Explorer and which is used in Office to render web content inside Word, Excel, and PowerPoint documents.

“The observed attack vector relies on a malicious ActiveX control that could be loaded by the browser rendering engine using a malicious Office document,” the researchers noted. Microsoft has since rolled out a fix for the vulnerability as part of its Patch Tuesday updates a week later on September 14.

The company attributed the activities to related cybercriminal clusters it tracks as DEV-0413 and DEV-0365, the latter of which is the company’s moniker for the emerging threat group associated with creating and managing the Cobalt Strike infrastructure used in the attacks. The earliest exploitation attempt by DEV-0413 dates back to August 18.

The exploit delivery mechanism originates from emails impersonating contracts and legal agreements hosted on file-sharing sites. Opening the malware-laced document leads to the download of a Cabinet archive file containing a DLL bearing an INF file extension that, when decompressed, leads to the execution of a function within that DLL. The DLL, in turn, retrieves remotely hosted shellcode — a custom Cobalt Strike Beacon loader — and loads it into the Microsoft address import tool.

Additionally, Microsoft said some of the infrastructures that was used by DEV-0413 to host the malicious artifacts were also involved in the delivery of BazaLoader and Trickbot payloads, a separate set of activities the company monitors under the codename DEV-0193 (and by Mandiant as UNC1878).

“At least one organization that was successfully compromised by DEV-0413 in their August campaign was previously compromised by a wave of similarly-themed malware that interacted with DEV-0365 infrastructure almost two months before the CVE-2021-40444 attack,” the researchers said. “It is currently not known whether the retargeting of this organization was intentional, but it reinforces the connection between DEV-0413 and DEV-0365 beyond sharing of infrastructure.”

How APTs become long-term lurkers: Tools and techniques of a targeted attack

June 22, 2022
We use cookies on our website to give you the most relevant experience by remembering your preferences and repeat visits. By clicking “Accept”, you consent to the use of ALL the cookies.
Do not sell my personal information.
Cookie SettingsAccept
Manage consent