For the Lazarus threat actor, financial gain is one of the prime motivations, with a particular emphasis on the cryptocurrency business. As the price of cryptocurrency surges, and the popularity of non-fungible token (NFT) and decentralized finance (DeFi) businesses continues to swell, the Lazarus group’s targeting of the financial industry keeps evolving.

We recently discovered a Trojanized DeFi application that was compiled in November 2021. This application contains a legitimate program called DeFi Wallet that saves and manages a cryptocurrency wallet, but also implants a malicious file when executed. This malware is a full-featured backdoor containing sufficient capabilities to control the compromised victim. After looking into the functionalities of this backdoor, we discovered numerous overlaps with other tools used by the Lazarus group.

The malware operator exclusively used compromised web servers located in South Korea for this attack. To take over the servers, we worked closely with the KrCERT and, as a result of this effort, we had an opportunity to investigate a Lazarus group C2 server. The threat actor configured this infrastructure with servers set up as multiple stages. The first stage is the source for the backdoor while the goal of the second stage servers is to communicate with the implants. This is a common scheme used in Lazarus infrastructure.

While it’s still unclear how the threat actor tricked the victim into executing the Trojanized application (0b9f4612cdfe763b3d8c8a956157474a), we suspect they sent a spear-phishing email or contacted the victim through social media. The hitherto unknown infection procedure starts with the Trojanized application. This installation package is disguised as a DeFi Wallet program containing a legitimate binary repackaged with the installer.

Upon execution, it acquires the next stage malware path (C:ProgramDataMicrosoftGoogleChrome.exe) and decrypts it with a one-byte XOR (Key: 0x5D). In the process of creating this next malware stage, the installer writes the first eight bytes including the ‘MZ’ header to the file GoogleChrome.exe and pushes the remaining 71,164 bytes from the data section of the Trojanized application. Next, the malware loads the resource CITRIX_MEETINGS from its body and saves it to the path C:ProgramDataMicrosoftCM202025.exe. The resulting file is a legitimate DeFi Wallet application. Eventually, it executes the previously created malware with its file name as a parameter:

The malware (d65509f10b432f9bbeacfc39a3506e23) generated by the above Trojanized application is disguised as a benign instance of the Google Chrome browser. Upon launch, the malware checks if it was provided with one argument before attempting to copy the legitimate application “C:ProgramDataMicrosoftCM202025.exe” to the path given as the command line parameter, which means overwriting the original Trojanized installer, almost certainly in an attempt to conceal its prior existence. Next, the malware executes the legitimate file to deceive the victim by showing its benign installation process. When the user executes the newly installed program, it shows the DeFi Wallet software built with the public source code[1]. 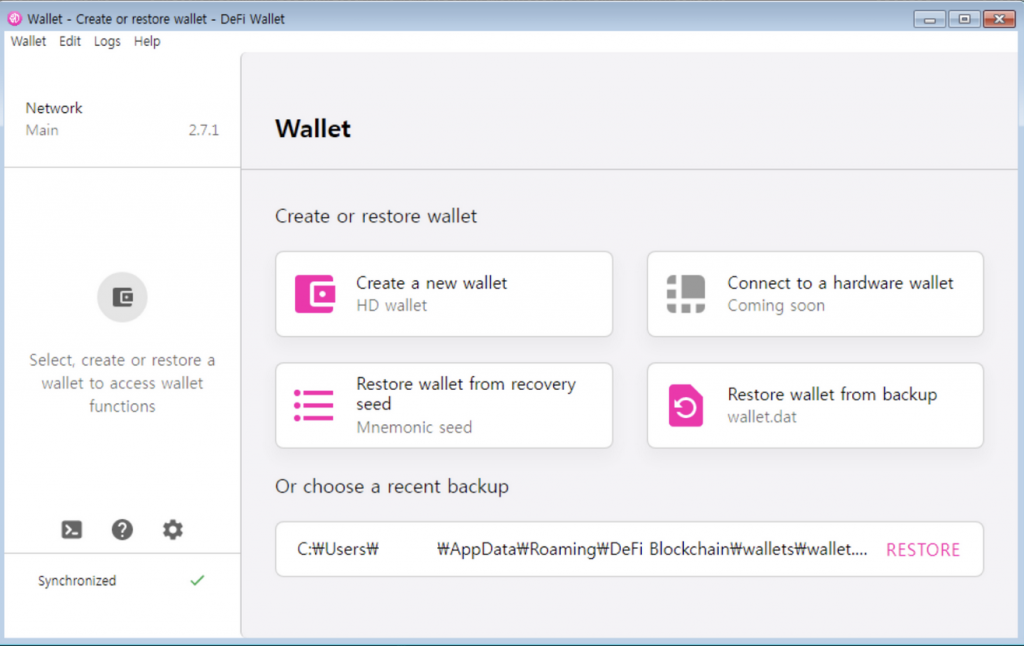 Screenshot of the manipulated application

The malware randomly chooses a C2 server address and sends a beacon signal to it. This signal is a hard-coded ‘0x60D49D94’ DWORD without encryption; the response data returned from the C2 carries the same value. If the expected value from the C2 server is received, the malware starts its backdoor operation.

Following further communication with the C2, the malware encrypts data by a predefined method. The encryption is done via RC4 and the hard-coded key 0xD5A3 before additionally being encoded with base64.

The malware generates POST parameters with hard-coded names. The request type (msgID), victim identification value, and a randomly generated value are merged into the ‘jsessid’ parameter. It also uses the ‘cookie’ parameter to store four randomly generated four-byte values. These values are again encrypted with RC4 and additionally base64 encoded. Based on our investigation of the C2 script, we observed this malware not only uses a parameter named ‘jsessid’, but also ‘jcookie’ as well.

The following HTTP request shows the malware attempting to connect to the C2 with the request type ’60d49d98′ and a randomly generated cookie value.

Depending on the response from the C2, the malware performs its instructed backdoor task. It carries various functionalities to gather system information and control the victim machine.

Lazarus only used compromised web servers located in South Korea in this campaign. As a result of working closely with the KrCERT in taking down some of them, we had a chance to look into the corresponding C2 script from one of the compromised servers. The script described in this section was discovered in the following path:

The script is a VBScript.Encode ASP file, commonly used by the Lazarus group in their C2 scripts. After decoding, it shows the string ’60d49d95′ as an error response code, whereas the string ’60d49d94′ is used as a success message. In addition, the connection history is saved to the file ‘stlogo.jpg‘ and the C2 address for the next stage is stored in the file ‘globals.jpg‘ located in the same folder.

This script checks what value is delivered in the ‘jcookie’ parameter and, if it’s longer than 24 characters, it extracts the first eight characters as msgID. Depending on the msgID value, it calls different functions. The backdoor command and command execution result delivered by the backdoor get stored to global variables. We have seen this scheme in operation before with the Bookcode[2] cluster. This script uses the following variables as flags and buffers to deliver data and commands between the backdoor and a second stage C2 server:

We believe with high confidence that the Lazarus group is linked to this malware as we identified similar malware in the CookieTime cluster. The CookieTime cluster, called LCPDot by JPCERT, was a malware cluster that was heavily used by the Lazarus group until recently. We’ve seen Lazarus group target the defence industry using the CookieTime cluster with a job opportunity decoy. We have already published several reports about this cluster to our Threat Intelligence Service customers, and we identified a Trojanized Citrix application (5b831eaed711d5c4bc19d7e75fcaf46e) with the same code signature as the CookieTime malware. The backdoor discovered in the latest investigation, and the previously discovered Trojanized application, are almost identical. They share, among other things, the same C2 communication method, backdoor functionalities, random number generation routine and the same method to encrypt communication data. Also, this malware was mentioned in an article by Ahnlab discussing connections with the CookieTime (aka LCPDot) malware.

In turn, we identified that the CookieTime cluster has ties with the Manuscrypt and ThreatNeedle clusters, which are also attributed to the Lazarus group. This doesn’t only apply to the backdoor itself, but also to the C2 scripts, which show several overlaps with the ThreatNeedle cluster. We discovered almost all function and variable names, which means the operators recycled the code base and generated corresponding C2 scripts for the malware.

Similar scripts to save data to a file

In a previous investigation we discovered that the BlueNoroff group, which is also linked to Lazarus, compromised another DeFi wallet program called MetaMask. As we can see in the latest case, the Lazarus and BlueNoroff groups attempt to deliver their malware without drawing attention to it and have evolved sophisticated methods to lure their victims. The cryptocurrency and blockchain-based industry continues to grow and attract high levels of investment. For this reason, we strongly believe Lazarus’s interest in this industry as a major source of financial gain will not diminish any time soon.

This table contains all the TTPs identified in the analysis of the activity described in this report.

What is ethical hacking? Getting paid to break into computers

APKTool – A Tool for Reverse Engineering...

August 24, 2022
We use cookies on our website to give you the most relevant experience by remembering your preferences and repeat visits. By clicking “Accept”, you consent to the use of ALL the cookies.
Do not sell my personal information.
Cookie SettingsAccept
Manage consent