Top Posts
New High-Severity Vulnerabilities Discovered in Cisco IOx and...
Atlassian’s Jira Software Found Vulnerable to Critical Authentication...
Less is more: Conquer your digital clutter before...
Is that survey real or fake? How to...
NTT, Palo Alto partner for managed SASE with...
New Russian-Backed Gamaredon’s Spyware Variants Targeting Ukrainian Authorities
Enterprises turn to single-vendor SASE for ease of...
ACLU, public defenders push back against Google giving...
Cybersecurity budgets are going up. So why aren’t...
APT groups use ransomware TTPs as cover for...
Home Security Watch Out For This Fake Windows 11 Upgrade Lure
Security

Watch Out For This Fake Windows 11 Upgrade Lure

According to a recent report from CloudSEK, an Indian cybersecurity firm, a malicious campaign is in the wild, targeting Windows users. The campaign particularly aims at users of old Windows systems as it hides behind a fake Windows 11 upgrade lure.

This domain mimics the legit Microsoft website’s layout to trick users. Hence, an average user might not be able to detect the fraud and may click on the visible “DOWNLOAD NOW” button. (Although noticing the site URL may raise a red flag, most users are not as knowledgeable about noting such things, especially when such sites start appearing in the search results.) 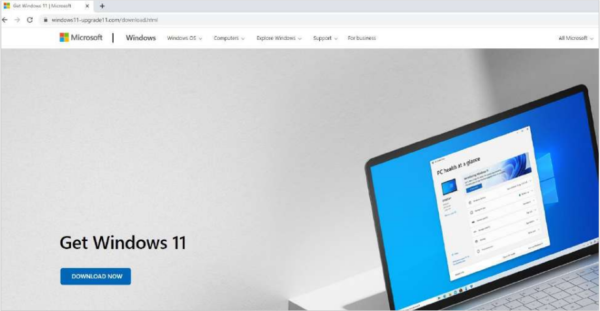 Clicking the “DOWNLOAD NOW” button downloads a .iso file on the system. (Again, this is similar to how Microsoft offers the Windows setup.) However, the attackers have strived to escape detection by first checking if the incoming request doesn’t come from TOR browser or a VPN.

Executing the malware loader starts the attack by infecting the system with multi-stage malware. The final step involves deploying and running the payload via user32.CallWindowsProcA API.

This payload is also a Delphi-based malware that exhibits the functionalities of a potent stealer. Upon infecting the target system, it steals data from its desktop and web browser. It also steals crypto wallets and stored secrets. The malware stores all the stolen information in the Temp directory, ultimately sending it to the attackers’ C&C server.

The recent malware campaign is just another demonstration of how the attackers exploit the average users’ requirements for malicious purposes. Since Microsoft Windows subscription costs are high, people often resort to finding alternative free means to get Windows, neglecting the underlying security risks. Nonetheless, falling victim to any dangerous malware like the one discussed can cause even more damage, including financial ones. Therefore, it’s wise to stick to the official means of getting any software or apps to avoid such threats.

Let us know your thoughts in the comments.

FBI Warns of BlackCat Ransomware That Breached Over 60 Organisations WorldWide

One in six people use pet’s name...

December 29, 2021
We use cookies on our website to give you the most relevant experience by remembering your preferences and repeat visits. By clicking “Accept”, you consent to the use of ALL the cookies.
Do not sell my personal information.
Cookie SettingsAccept
Manage consent